Since I’ll be doing the PCT this year (2015) and will likely encounter snow and ice in the Sierras, I wanted to brush up on my Snow Skills.

Ned Tibbits is the Director/Instructor/Janitor and was the one who led five intrepid students (Myself included) to Carson Pass on a 3-day training backpacking trip.

It was a blast!  Nothing like snowshoeing to let you know how NOT in shape you are!  The purpose of the course was how to handle the Back Country with a focus on:

The biggie for me was the self arrest training.  One of the few ways people die on the high passes is by slipping and falling hundreds or thousands of feet down a slope.  I had ice ax training once over 40 years ago…it was time for a refresher.

The class started at the southern PCT trailhead on the Carson Pass.  We diverged from the PCT and showshoed southwest to Winnemucca Lake, where we set up Base Camp.

I didn’t have a 4 season tent, so I rented one from Ned: 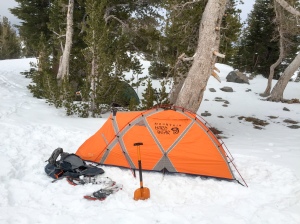 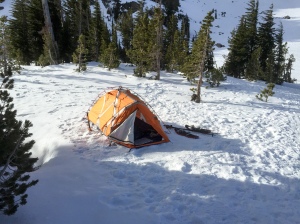 The Mountain Hardware EV2 is a single wall 2-man tent that is spacious for one.  It suffers from condensation like all single wall tents, but is pretty bombproof.

One of the things Ned suggested we try is cooking inside the tent.  This was new for me as I’ve heeded the advice of NOT doing this in the past.  SilNylon, what most tents are made from, is extremely flammable!  Per Ned, as long as we use canister stoves and center them, they are fairly safe.  I tried it, and it worked great with the added bonus of heating the tent!  The temperature on first day got up to maybe 45.  That afternoon it was windy and we all retired for the “Night” at 4:30.  Later that night the wind picked up with some blowing powder and got down to the teens, so the extra warmth was welcome.

I don’t think I want to do much more winter backpacking.  The cold, short days and long nights just aren’t as much fun.

Anyway, the class really started on Saturday where we took off cross-country to work on handling different terrain.  We practiced Traversing slopes with both Snowshoes and Boots; How to properly kick steps, how to hold your legs and feet and proper use and handling of poles.

Sunday we spent all day falling, which is more fun than it sounds!  We started off with practicing Glacading:

As the definition says, it is a controlled slide, typically on your butt.  You use one of your hiking poles to steer and keep you facing downhill.  It’s harder than it sounds while wearing a pack as it makes you top heavy and it wants you to go downhill upside down!  But it’s a blast and most people use it to descend from the passes.

Once we compacted the snow, the real training started.  We practiced stopping ourselves using either an ice ax or the Whippit.  I had purchased a Whippit at the suggestion from Ned and really like it.  The Whippit is a cross between an Ice Ax and a Hiking Pole.  Specifically, the head of the ice ax.

Ice Axes are too short to hike with, but you only need the “Head” to stop yourself with a self arrest.  The Whippit works great as a combination tool.  Cheap insurance.

So we spent the morning and early afternoon practicing Self Arrest.  I think I have it.  At least, I hope I do.

Overall it was a very worthy three day weekend and I highly recommend the course!